SUNDAY,  June 15, 2014 – Since our previous  blog entry (last March!) we have been very busy. A flurry of late season ice climbing was followed immediately by R.L. guiding three weeks of ski mountaineering in the French Alps. The great weather and snow conditions made this a trip to remember. Not that France is ever easy to forget…

Upon returning from Europe in late April, mud season was in full swing so we focused on office tasks. For the past month or so we have spent long hours in front of the computer, sorting and paring down photos for Classic Adirondack Climbs. Although our collection includes photos of all the routes in the book, our recent efforts have yielded much better photos than attempts from years past. As a result, after careful consideration, we have decided to reshoot many of the climbs. This will push our planned publication schedule back a bit but we think it will be worth it. We’ll be posting our summer/fall shooting plans soon and we welcome your participation if you wish to climb for our cameras.

As you probably know, mud season is followed by black fly season in the Adirondacks. On a beautiful, breezy, day in May, rather than remain office-bound, we hiked to the summit of Mt. Van Hoevenburg with our cameras. We were particularly taken with the cloud formations that day, along with the light green color of the newly-opened leaves on the maples, birches and beeches. 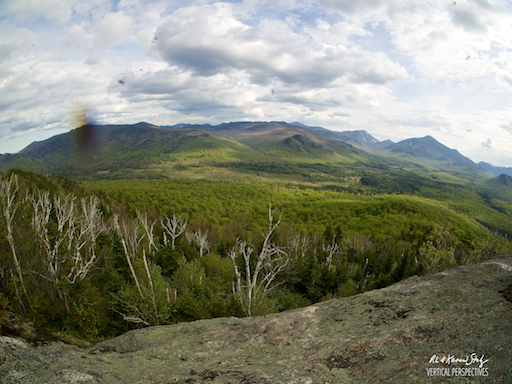 When the wind abated the bugs were horrific. They especially bothered our dog, Terra, who dug a hole and buried her head in it to keep them at bay! In the photo above, shot in calm conditions, we count 18  black flies visible in the frame. Removing them in post-processing would certainly not tell the story as it was.

Although rock climbing during black fly season, in windy locations, can be enjoyable, photographing climbers at this time of year is a low-odds endeavor. Now that the mud and bugs are mostly gone we are ready to be out shooting climbs and climbers once again.